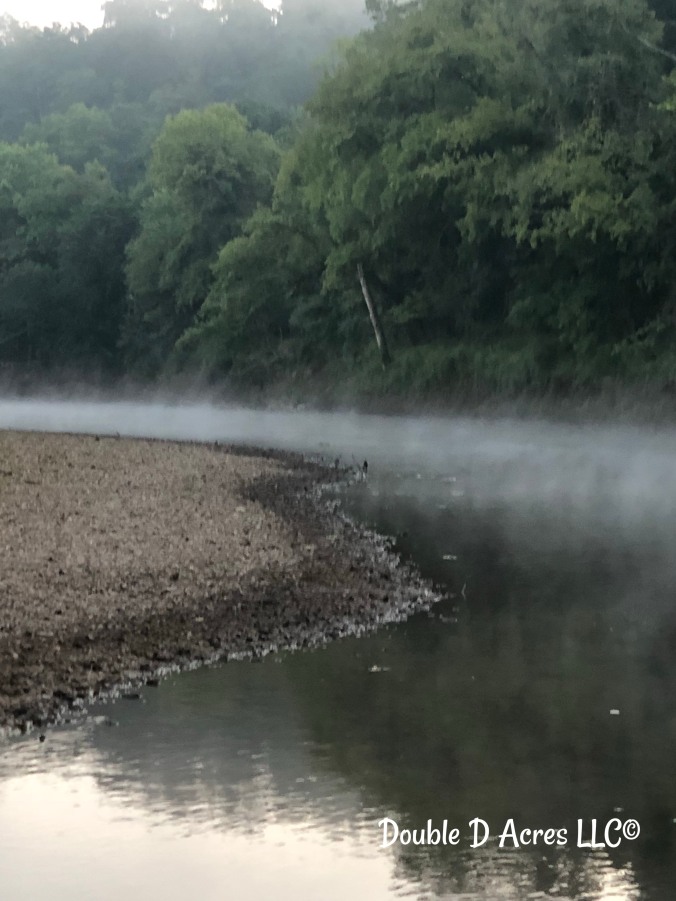 Big River near DeSoto, MO as darkness gives way to the dawn.

I have always been mesmerized by the beauty of the river.  Due to flooding it is constantly changing but Mother Nature seems to always protect its beauty.  If only man would cherish the river as much as Mother Nature.  The pollution and the trash left behind has grown, adding an ugliness that shouldn’t be there.

“The River… It’s my world, and I don’t want any other.  What it hasn’t got is not worth having, and what it doesn’t know is not worth knowing.  Lord! the times we’ve had together.” – Kenneth Grahame

On August 11, I decided to spend a very much needed night on the river.  Temps were in the 90s and humidity was high.  I loaded up and went to Mammoth Access on the Big River in Missouri.  A lot of people on the river and I got a lot of stares.  I have had a round with melanoma so I show up in a long sleeve shirt and jeans and really don’t look like I belong.  I board my yacht and head up river for a much anticipated night of relaxation.

As I paddle I look for spots to set limb lines and a place to make camp for the night.  I opted out of taking a tent and would opt to catnap on board my trusty yak.  After finding places for lines and camp I went to an area to do some bass fishing however the fish didn’t seem to like the smorgasbord I provided for them.  I finally started tight line fishing and waited for dusk to show up at which time I would set and bait lines in hopes of catching some catfish.

Big River near DeSoto, MO as dawn takes over the night.

“A river seems a magic thing.  A magic, moving,, living part of the very earth itself.” – Laura Gilpin

I finally finished getting the lines set and baited around 8:30 p.m.  I then set up camp and  set up for tight line fishing while I waited until time to run my lines.  I like to run my lines every 2 and a half hours.  All I seemed to get was empty lines with no bait.  There was a bait stealer loose in the Big River.  My luck wasn’t much better with my tight line fishing but I did manage to get a good fire started.

The night got cool enough that the fire actually felt good.

Finally I managed to catch a drum, or stone perch.  I put it on a stringer because I had plans for it.  I also managed to catch a sucker but since it wasn’t high on my culinary preferences I returned it to the river.  They are pretty bony. 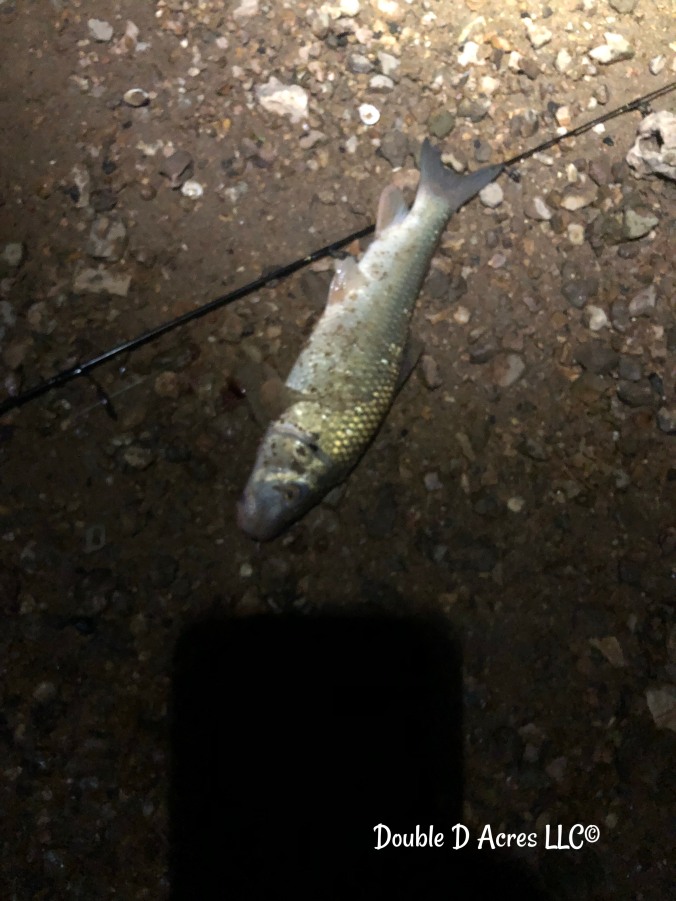 One of Missouri’s suckers.

Around 4:30 a.m. my beef stew MRE had began to wear of so I prepared the fish for breakfast.  I didn’t have anything to cook it in so I improvised and rigged up quite a contraption to cook it with.  I used some green tree limbs and fashioned sort of a spit and cooked it 10 minutes on each side and I am here to tell you it was delicious.

Breakfast on the river.

The darkness began to give over its control to the rays of sunshine.  I headed out to run my lines and take them out.  As I was running the lines I heard something that sounded just like a lamb.  I use to raise sheep so I know the sound all too well.  I could hear it but couldn’t see it.  finally it broke out of the brush and to may surprise it was a fawn still sporting its spots.  I figured it got separated from its mom and hopefully it wasn’t an orphan.  Then I got my answer.  I hear the bleat of a doe and the fawn spun around and headed back into the brush giving what sounded like a very happy round of bleats.

“A river or stream is a cycle of energy from sun to plants to insects to fish.  It is a continuum only broken by humans.” – Aldo Leopold

All the lines were empty and void of bait but one.  I noticed that it was wrapped over a limb but is wasn’t moving so I figured I had caught one and it wrapped the line around the limb and got off.  I managed to pull the line and limb up but to my surprise the line wasn’t empty.  No sirree!  As it broke the service I found a 20 pound, at least, soft shell turtle hooked by its foot.  This means that its head was free.  Now I am here to tell you when it comes to the length of a neck the giraffe has nothing on a very pissed off soft shell turtle.  Now the pucker factor has kicked in and his neck extends way out, jaws snapping and barley misses my arm.  We wrestled for a while and I was finally able to unhook him and I gave a sigh of relieve that was probably heard in St. Louis.

After all the excitement and I calmed down a little I headed up river for about 2 hours and then turned around and fished my way back to the boat ramp.  I managed to catch one small Largemouth bass and that was all she wrote.

It wasn’t a very productive fishing trip but the relaxation and peacefulness I enjoyed was priceless.  Being alone on the river without any distractions is the perfect way I have found to cleanse the soul and recharge the spirit.  I have always said when I die I want to be cremated and my ashes spread in the river.  That is the only place that I can experience a true sense of peace and tranquility.

“A river is more than an amenity, it is a treasure.” – Oliver Wendell Holmes

Thank you for taking the time to read my blog.  I apologize for being a little long winded.  If you get a chance to sit on the bank of a river, close your eyes.  Listen to the running water and feel its energy.  Like us it has a destination.  A beginning and an end.  It has its low times (summer) and high times (floods).  Outside the interference of man, dams and levees, it manages to take out any obstacle in its way to its destination.  We can learn a lot about life from a river.  Remember to spread the love.

"No man ever steps in the same river twice, for it's not the same river and he's not the same man." Heraclitus Photography, kayaking, fishing and horses are my passions. I love the outdoors, camping and I love cooking in Dutch ovens. Love reading Muir, Emerson and Thoreau. A lot of folks tell me I was born 100 years too late.